“ Capture fragile and fleeting moments in our ecological history"

“Small Adjustments” is an article featured in COLLECT published in The Site Magazine's Deviant Devices pamphlet series, Volume 40.2. Written by Miriam Ho and based on work and images by Sandra Smirle.

you can read it here:

The Dollhouse at the End of the World

As half of the world is burning and the other half is under water, as people around the world are uprooted by effects of man-made climate change, war and increasingly extremist governing, the Dollhouse at the End of the World confronts this complex moment of deconstruction to address the chaotic, nonsensical worldwide choreography that we are collectively performing. The installation tackles the state of the world today – teetering on the brink of 2 minutes to midnight and environmental apocalypse – through collecting and combining the five artists’ practices and materials of work to give birth to a recombined ominous aesthetic.

My aim during the 28-day residency was to integrate outdoor and in-studio explorations within a multi-disciplinary approach. Disengaged from the virtual bombardment of urban noise, I endeavoured to zero in on and draw out my relationships with weather & climate, disintegration & pollution, boundary, location and journey – as manifested through a series of walks, both solitary and with others.

Two public workshops offered an opportunity to share in the experience of aerial mapping, using both a kite and a balloon. My intent was to offer a visual snapshot on a shoreline-as-timeline which might serve as a public measure or mark for future documentation/reference.

The work in this gallery contains all the plastics I repurposed from the inevitable, ubiquitous shoreline debris collected during my stay at Gibraltar Point. Sadly, I leave behind a kite and a GoPro claimed by the icy, turbulent lake. Despite concerted efforts by visiting artists and local community members, we have so far been unable to recover either device, now persisting as so much hazardous junk. Given that this project was conceived in part as a recognition of the often voluminous waste material generated by making artwork, the irony of my misadventure is not lost on me.

A new series of work, Stellar Baby is opening March 31st at Loop Gallery.
Using video, photo, paper cutting and sculpture this work continues to explore notions of seeing and being seen. My gaze has shifted from a macro-picture to a micro-view — a place, in every sense, closer to home. As living and maturing in a rapidly changing world sends us pinging from pressure point to tension to perplexity, the need to grab hold and monitor the (domestic) situation seems like a natural response. This is surveillance in an older sense of watching over, or guardianship. 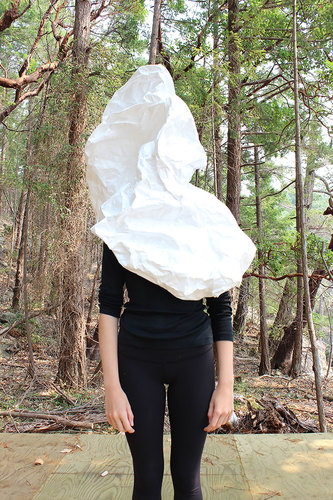 String Theory, Potential Probabilities is being remounted at Dawson College in Montréal in the Warren G Flowers Gallery. An 18' panoramic paper cutting and 2 vitrines installations are being added. Stay tuned for new images. 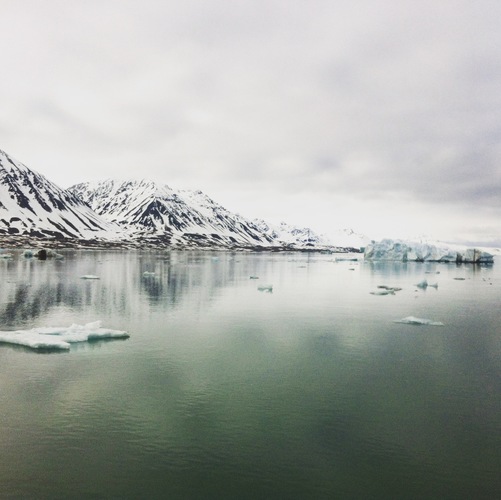 IFPP collective launched in the summer of 2017 with it's inaugral exhibition SOFT LAUNCH. We recently spent a week in residency at @ymunogallery  collaborating on a multimedia installation THE DOLLHOUSE AT THE END OF THE WORLD, and performed in it during Montréal's Nuit Blanche. 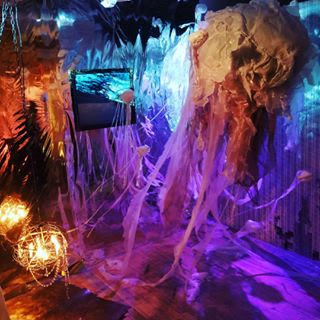 The very function of locating something as fragile, elusive and multidimensional as a quantum particle is enough to cause its infinite simultaneous possibilities to collapse. Ditto surveying the Arctic – a place where documenting the present will redefine past and future…

String Theory allows for probability to take the place of self-defeating measurement. Like a kite connected by an invisible wavelength, we imagine the potential.

This past summer, I had the opportunity to participate in a residency aboard a 120’ tall ship sailing the waters of an Arctic archipelago just 10 degrees from the North Pole. Traveling to such a remote location as Longyearbyen in Svalbard, the site of renowned historical explorations, offered a unique opportunity to work in a stark and seldom-seen landscape. Drawing on research material from this residency, this multidisciplinary work offers the viewer a unique, panoramic view of a partly real, partly imaginary Arctic land-and seascape of converging and diverging images. Given the insufficiency and inherent fallibility of historical surveying in the Arctic, it might represent a narrative of something, or somewhere that never was. 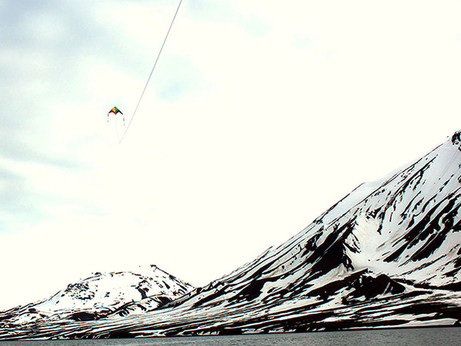 TEST FLIGHT #1: to test Arctic like weather conditions for visibility and recording in preparation for the June 2014 Arctic Circle Residency Expedition in the international territory of Svalbard, an arctic archipelago 10º latitude from the north pole.

These projects were generously funded by: http://hexagramciam.org/